Glen Thirsty: The history and archaeology of a desert well 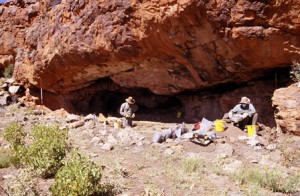 The archaeology of Glen Thirsty, a desert well in the Amadeus Basin, Central Australia, illustrates the changing relationship between the ranges and desert lowlands during the last 1500 years. Historical records and Aboriginal accounts of the site document the regional importance of Glen Thirsty as one of the few wells in this part of the desert. Archaeological excavations and rock art research show that despite its proximity to Puritjarra with its long, late Pleistocene record of occupation, Glen Thirsty only became an important focus of occupation after 1500 BP. Several lines of evidence independently suggest the establishment and consolidation of a new cultural and economic landscape in the Glen Thirsty area around this time. Growing population pressure and shifts in patterns of land-use and economy in the Central Australian ranges may have provided the impetus for more intensive use of the Glen Thirsty area, although the timing of this was constrained by climatic factors. As a rain-fed well in the lower part of the Amadeus Basin, Glen Thirsty is sensitive to shifts in palaeoclimate and its history reflects changes in regional rainfall patterns during the late Holocene.

Image caption: Excavations at Glen Thirsty 1 (published in Australian Archaeology 66:48).
Mike A. Smith and June Ross
Glen Thirsty: The history and archaeology of a desert well
June 2008
66
45-59
Article
You must be a member to download the attachment ( Login / Sign up )