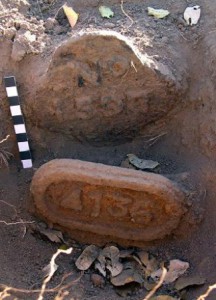 In situ grave markers at the West End Cemetery (published in Australian Archaeology 65:45).

Geophysical surveys were undertaken at Townsville’s West EndCemetery to examine the cultural and/or ethnic association of graves and to test the potential use of different forms of geophysical prospection on archaeological sites in the north Queensland environment. Surveys focused on an area of the cemetery known as ‘E Block’, which contained little physical or historical evidence for burials but was believed to have been used for the interment of ‘non-Christian’ individuals. While results from the resistivity and ground penetrating radar surveys were inconclusive and difficult to interpret, the magnetometry surveys located the graves of 65 individuals. Details on each individual’s cultural attributes derived from the cemetery’s burial register indicated that they were from a diverse range of ethnic and cultural backgrounds, many of which were previously unrepresented amongst extant grave markers. The survey results provided information that could not be gained from any other source, and enabled the critical examination of aspects of the cemetery including the past management regime, the spatial patterning of graves and whether or not an individual’s ethnic, social or economic characteristics contributed to their spatial placement.

Ross Stanger and David Roe
Geophysical surveys at the West End Cemetery, Townsville, Queensland
December 2007
65
44-50
Article
You must be a member to download the attachment ( Login / Sign up )