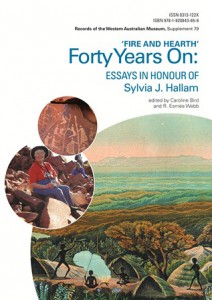 This is a well-presented collection of essays to honour the pioneering work of Sylvia Hallam. In many ways the essays and commentary reflect the broad range of Hallam’s interests that spanned spatio-temporal archaeology, ethnography and important questions concerning fire and its impact, manipulation of plants, population and the relevance of change. Many of the issues central to key debates in Australian archaeology, such as the ‘intensification’ debate, can be found addressed in Hallam’s work. Here, Hallam and her work become much more accessible to us through use of photographs, personal reflexions and encounters and sustained reference to her in most of the papers. And the quality of presentation (including colour photographs) is best represented in papers such as those of Ken Mulvaney on the Dampier Archipelago petroglyphs and Peter Randolf on Indigenous stone arrangements in the south of Western Australia. Isabel McBryde introduces the volume with a detailed, informed overview of the papers, at all times steering close to their association with the work of Hallam herself. She points out the broad sweep of Hallam’s interests that went way past the positivist, material cultural directions that Australian archaeology embraced at the time to include the socio-cultural realm and more subtle interactions between it and the material world. Hallam was not afraid to challenge the accepted thinking of her day, including the proposed demographic modelling of Aboriginal populations through time, and also she expressed views concerning Indigenous control over the productivity of land and its resources that at the time were considered signatures of more ‘advanced’ food producing societies.

Hallam’s book Fire and Hearth published in 1975 is discussed by both John Mulvaney, in his discourse on her work, and by Caroline Bird in her Preface. It draws upon the independent observations and arguments in 1968 of Duncan Merrilees and Rhys Jones concerning the dynamic role of the Indigenous use of fire and its possible consequences regarding environmental productivity. Jones termed this practice ‘firestick farming’, thus appearing to question the age-old definition of Indigenous Australians as ‘hunter-gatherers’. Hallam’s detailed ethnographic and archaeological studies in the south of Western Australia took up these issues including the questioning of Indigenous representations by detailing ‘the South-West’s warren husbandry with its associated ‘yam fields’ and ‘villages’’ (p. vii). Her thoughtful and stimulating explorations of the consequences of these issues as regards Australian prehistory through time and geographical space form the core of her writing.

The contributions to this volume also span a broad range of issues referring to Hallam’s work, some of which are addressed here. Martin Gibbs, for example, revisits his archaeological and ethnographic study of the wooden Barragup mungah, an Aboriginal fish trap on the Swan Coastal Plain that was the economic support for an important venue ‘in a complex series of social economic and ceremonial networks’ (p.4) in the district. The annual winter meeting on the Serpentine River at Barragup, which may have run for two to three months, was one of the most important socio-economic events. He discusses the significance of this system, for the retrieval of large quantities of sea mullet and Australian salmon, in terms of the social relations of the region and more broadly as an aspect of ‘intensification’ within the wider Australian ‘intensification’ debate. Updating his example with more recent Indigenous oral history, he also makes the important point that irrespective of when fish traps were first introduced it is their operation in such socio-economically complex ways that marks their significance at this point in historical time.

Moya Smith presents a detailed and fascinating archaeological example from the Esperance region of southwest Australia. Based upon a large-scale archaeological survey of surface sites, and one stratified site Cheetup, she argues for a long-term cultural strategy of sustained mobility throughout the Holocene. This is despite ameliorating climatic changes and a broadened resource structure in the coastal zone that could have sustained a less mobile pattern. In other words, both spatially and temporally while conditions inland remained semi-arid, the richer coastal region was capable of supporting higher population densities and less mobile strategies. Ecological modelling also supported her findings. She concludes that this mobile pattern is suggestive of a particular southwest cultural pattern, one also identified by Ferguson in the King George Sound region some 400km west of Esperance. She argues, ‘(m)obility may be a well-entrenched pattern constrained by social relations that would survive whatever the environmental regime’ (p. 28). In this way we are presented with an interesting proposition of the ways social relations impact upon, and are intertwined with, ecological relations. More detailed excavation of stratified sites (where available) would help resolve some of these issues.

Neville Green’s moving account of Aboriginal sentencing in Western Australia in the late nineteenth century details the case of the Rottnest Island prison. More than 3670 Aboriginal men served sentences on the island between 1838 and 1931. He considers several of the laws concerning Aboriginal sentencing after 1870 and the method of policing and sentencing in the northern regions of the colony. He focuses particularly upon areas such as the Gascoyne, Upper Gascoyne and Upper Murchison, from which a disproportionate number of Aboriginal prisoners originated. These examples he views against the social history of the day to question the ‘criminal acts’ themselves. For instance, sentencing was often related to clashes between Aboriginal people and an expanding pastoral frontier that harshly restricted Aboriginal access to traditional lands and resources. On pastoral stations Aboriginal men, women and children were legally indentured servants, and ‘‘(a)bsconding’ from an employer was a common charge’ (p.82). Green argues that changing attitudes towards Aboriginal people, from protectionist to harsh and punitive, underlie the implementing (and sometimes formulating and passing) of the laws themselves.

In her study of Groote Eylandt, Anne Clarke uses early historical records, archives of the Church Missionary Society and anthropological sources, such as those of Tindale, McArthur and McCarthy, from 1921 to the 1970s to examine processes of cross-cultural interaction and change. She documents changing lifeways, from a time of Macassan traders and a broad spectrum mobile ‘hunter-gather’ economy, embedded in traditional systems of trade and exchange, to increasing levels of sedentism within a commodity-based system of trade and exchange. As time passed, hunting-gathering became a part-time pursuit. She also considers the effects of change on material culture, such as elaborately decorated wooden artefacts and canoes and upon diet. She concludes that rather than be viewed as ‘records of loss’ or for purposes of reconstruction, they ‘be seen as powerful narratives of how Indigenous communities negotiated the challenges presented by the incursion of western society into their daily lives’ (p.107).

Peter White revisits the question of the ‘Neolithic problem’ in Australia, a paper he first published 40 years ago, including a comparison with New Guinea. He argues that the two regions share many ethnographic and archaeological similarities that are often obscured by terminology such as ‘Neolithic’, ‘agriculture’ or ‘hunter-gatherer’. He discusses trends and examples from the ethnography and archaeology of both regions, including in Australia an emphasis on certain ‘staple’ plants and evidence for high population densities and resource/environmental management, as in the Murray River basin, southwest Victoria and southeast Queensland. He speculates ‘that agriculture may have occurred in parts of Australia’ (p.89), and that ‘(s)ome Australian data, if found in New Guinea, would label those societies as agricultural’ (p.86). He focuses particularly upon definitions of ‘agriculture’ and archaeological evidence for plant remains; advocating residue analysis and further historical enquiry as avenues of future research.

In some ways White’s paper helps to break down the traditional barriers between the two ‘research’ areas, Australia and New Guinea. Unfortunately, however, it is under-referenced. And it is disappointing also, for it largely fails to address the Australian ‘intensification’ debate and its wider world context, where many of the key issues raised by his paper have been widely discussed. In effect, the topic of his paper is largely underpinned by this debate. Others, including myself, have been championing similar ideas for many years, including the New Guinea comparison. Here, White appears to be arguing from within the preceding world ‘agricultural’ debate, not appreciating that many of its central issues and problems have been reworked or remodelled through the world ‘intensification’ debate that followed and continues to be widely influential today. Questions concerning change, ‘agricultural’ origins, historical process and context (for example, socio-cultural or environmental) were widely considered in the ‘intensification’ debate. And this was done so in the context of ‘complexity’ among ‘hunter-gatherers’ so as to overcome the problem of creating arbitrary ‘boundaries’ and terminology such as ‘Neolithic’, ‘horticulture’ or ‘agriculture’. As most of their features, including ‘staple’ plant species (‘domesticated’ or ‘wild’), can be found among ethnographic and archaeological examples of ‘hunter-gatherers’. Indeed, the development of ‘agriculture’ or ‘horticulture’ was viewed along with other processes of intensification taking place within ‘hunter-gatherer’ societies. In these ways, new images of ‘hunter-gatherers’ were shaped. In the New Guinea and Australian setting ‘horticulture’ or ‘agriculture’, irrespective of categorisation, is clearly linked to ‘hunting-gathering’. And the socio-cultural context is also an important part of the process. Context and process are as important here as the ‘staple’ plants themselves, if not more so, and are no more or less identifiable archaeologically. It is a pity, therefore, that he has missed the opportunity here to render a concise, critical review of this important topic of debate – one that goes to the heart of present-day New Guinea and Australian archaeology – in fact, to the core of current world hunter-gatherer studies themselves.

The topographic study of Caroline Bird and James Rhoads considers strategies for investigating surface archaeological evidence in relation to landscape features in the extensive semi-arid southern Wimmera region of Victoria. Using a novel strategy based upon mapped landscape attributes (for example, variations in relief and water sources) they produced consistent results linking archaeological patterning to particular water sources in line with historical evidence and some prior archaeological studies. They would have benefited also by discussing their findings more broadly. For example, in relation to sampling methodology, and to the results of other researchers in the wider, general region, such as Anne Ross’s earlier study that was directed at questions concerning population dynamics and their association with climatic changes and distribution of resources; questions central to Hallam’s research interests and also related to Moya Smith’s paper in this volume. Martin Gibbs’ paper is related also as their study area included the site of Toolondo.

In all, as a general comment I feel that many of the papers here, while interesting as they are, would have been enhanced still further by expanding their results, and the significance of these, in wider contexts and in the wider literature, more in the spirit of Sylvia Hallam’s work: that sought to open up our minds to explore new possibilities while generously acknowledging the work of others.

As for myself, in Sylvia Hallam’s work, I too found encouragement for my own research that was following similar themes to hers throughout the 1970s and 1980s. And I will always remember her enthusiastically taking me on a day-long tour of the archaeological sites she had excavated around the wider region outside Perth and her hospitable and generous personality.

Harry Lourandos
'Fire and Hearth’ Forty Years on: Essays in Honour of Sylvia J. Hallam edited by Caroline Bird and R. Esmée Webb
December 2011
73
79-81
Book Reviews
You must be a member to download the attachment ( Login / Sign up )