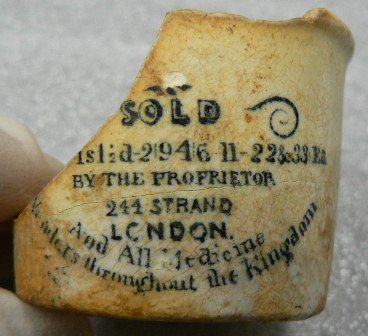 Ceramic jar recovered by a diver from the Dunbar (1857) wreck in Sydney (photo courtesy of Jennifer Rodrigues).

Despite the significant volume of research carried out on private collecting behaviour and the theories that underpin this phenomenon, the nature and pattern of collecting behaviour relating to shipwreck sites have not been the focus of previous studies. The culture surrounding wreck diving and souvenir hunting in Australia prior to the enactment of the Commonwealth Historic Shipwrecks Act 1976 was such that there was little or no restriction on what divers felt they could do to shipwrecks, and what or how much material they removed. As a result, since the 1950s (though in some cases earlier), most wrecks off Australia’s coast that were known to divers suffered varying degrees of impact from souvenir hunting and scrap metal collecting activities. These included the use of explosives, dredging and tools (e.g. hacksaw, crowbar, hammer, chisel) to dislodge or loosen material for recovery. Consequently, a portion of Australia’s submerged archaeological evidence was lost into private hands. What proportion, and what material, was unknown to those tasked with the responsibility of managing and preserving this resource.

In 1993 a nationwide historic shipwrecks amnesty was announced in Australia to encourage divers, collectors and others to declare their historic shipwreck relics for documenting and enhancing information on Australia’s maritime heritage. This study analysed this largely unrecognised and underutilised evidence to determine the degree of impact that private collecting has had on Australian shipwrecks, and the extent to which interpretation has been affected by this behaviour. The results were then used to explore the applicability of existing theories about collecting behaviour, such as the criteria applied to adding objects to collections, the different types of collecting (e.g. collecting tangible objects versus collecting of experiences, and collecting rare or mundane objects driven by different personal motivations), changes in collecting behaviour through time due to personal circumstances, and the fate of private collections since acquisition.

Other important outcomes of this study are a detailed and critical analysis of Australia’s shipwrecks amnesty process, its effectiveness in bringing to light private collections, and the legal and practical implications for Australian maritime heritage management as a result of the amnesty. As well, there are now availabile two (relational) databases resulting from this work: the National Amnesty Artefact Database and the National Amnesty Shipwreck Database.

Jennifer Rodrigues
Finders keepers: An examination of the impact of diver interaction with shipwrecks as revealed by the 1993 amnesty collections
June 2012
74
116
Thesis Abstracts
You must be a member to download the attachment ( Login / Sign up )