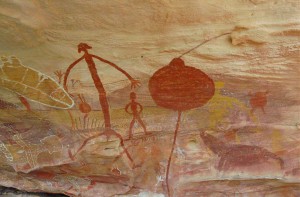 This paper reviews a changing scenario of cultural heritage management in the Quinkan region, Cape York Peninsula, currently experiencing unprecedented pressures from tourism and mining. From 1971 State and Federal governments acted to address concerns over protecting Quinkan rock art from modern impacts such as tourism: Gresley Holding (locally known as Crocodile Station) received statutory recognition as a declared ‘Aboriginal site’, the Quinkan Reserves were created, and ‘Quinkan Country’ was listed on the (now defunct) Register of the National Estate. In the 1990s the Quinkan Reserves were transferred to Aboriginal Land Trusts, and the local Aboriginal corporation received intermittent government grants to help manage tourism. In 2004 the State government opened an interpretive centre in Laura as a tourism initiative without providing for a visitor management system. Today, virtually the entire Quinkan region is affected by applications for minerals and coal exploration. The outstanding heritage values of the Quinkan region are threatened by this potential mining development, coupled with expanding tourism, and traditional owners are struggling to manage their cultural heritage. It is not clear how current heritage legislation, environmental codes and the status of ‘Gresley Pastoral Holding-Crocodile Station’ as a Declared Landscape Area (DLA002) will be applied to protect the area into the future.

Cole, N. and A. Buhrich
Endangered rock art: Forty years of cultural heritage management in the Quinkan region, Cape York Peninsula
2012
75
66-77
Article
You must be a member to download the attachment ( Login / Sign up )