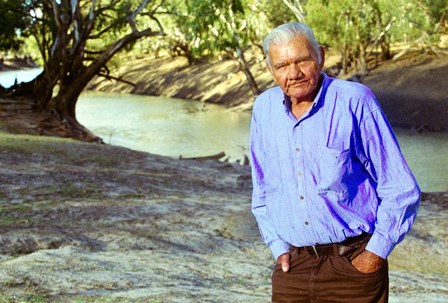 ‘Uncle’ Ted Fields – Garruu Gambuu, a Euhlaroi elder from Walgett in northern New South Wales had a remarkable life, setting an example that few could emulate. Uncle Ted was a custodian of the language and culture of the Euhlaroi tribe, including knowledge of the Gamilaroi language.

One of five children (Flossy, Jimmy, Evelyn, Edward and Dawn) born to Greg Fields and Mary Hall, his first memories were of Yerranbah Shed near Angledool where people camped as they worked on the pastoral properties, burr cutting, pear poisoning, timber cutting and rabbitting. They were generally paid in rations: flour, tea, jam, sugar, golden syrup and bully beef. During his early years on the mission at Angledool, he was actively discouraged from speaking language and forced to speak English.

Getting to school at Angledool involved walking a few miles in bare feet through galvanised burrs and across a stoney ridge. At some stage, Greg Fields, Euhlaroi man, came from the Angledool area and worked in various jobs as a general handyman. He eventually moved to Bangate Station (the home of Katie Langloh-Parker) around 70 miles from Brewarrina where he worked as head stockman for many years. Mary was also Euhlaroi, they married in 1916, but she tragically died in childbirth in April 1938 in Brewarrina while living on the mission there. More than eight different tribes were forced to live together on the mission and this provided many tensions. After Mary’s death, Greg took the children to live with their tribal grandmother at the camp at Angledool.

Greg Fields continued to work at Bangate Station and Ted’s elder brother Jimmy also worked there. At one stage (c.1941) Ted was staying with an aunt at the Brewarrina mission. He made his father leave a pony in case he wanted to return to Angledool. After a period, he took his younger sister Dawn, and the pony his father had left them and they (Ted was then seven) walked the 70-odd miles (c.110km) back to Bangate station. The journey took three days, their path taking them along the Kato River and around the western side of Narran Lake and up the Narran River.

Ted was forced to work as an unpaid ‘houseboy’ on Bangate Station from the age of 10, working from 4am to late at night. At the age of 12 or 13 he was ‘arrested’ by the Aboriginal Welfare Board as a ward of the state and after absconding was finally sent to the Brewarrina Mission. Ted later went bush, and for the next few years travelled the big stock routes in western New South Wales and southwest Queensland doing odd jobs on stations. During the years of travelling and the immense amount of time spent alone, Ted taught himself to read and write.

During the 1950s, Ted (and Jimmy) contracted polio and spent three years in the hospital in Bathurst. His return to Bangate was delayed during the floods of 1956. After a period of about four years breaking horses again, and doing various jobs out west, he returned to Walgett where he based his life ever since.

In the late 1950s Ted became involved in Civil Rights, demonstrating alone to break the colour bar in Walgett. He was jailed three times and bailed by his employer each time. Ted recalls working on a property where a jackaroo refused to eat food prepared by an Aborigine. The manager told the jackaroo to go back to the camp and if he hadn’t eaten before the end of the camp (three weeks) they would discuss it again.

In the 1960s, Charles Perkins identified the need for an Aboriginal Community Hall in Walgett and promised that it would be financed by the Foundation for Aboriginal Affairs in Sydney. Ted recalls being laughed at by Perkins when he announced the local people would help finance and plan it. With the help of Alec Trevallion the Shire Clark they achieved their goal of providing the foundations.

In the late 1960s Ted came to the University of New England to work with Ned Iceton and Ray Kelly in the Department of Adult Education. The work involved running Aboriginal social development workshops and the Aboriginal Human Relations Newsletter. The progressive nature of this strategy produced a backlash and Ned and colleagues were banned from working with Aboriginal people after 1974.

It was clear to Ned and his colleagues that Ted had a clear understanding of the impact of European society on Aboriginal cultural heritage, contrasting, as Ned states ‘the imperial selfishness of our white cultural style as compared with the cooperative mutuality which was expected within Aboriginal society’. Ted was articulate, had an acute social imagination and had great fluency and style in his written expression – all from someone whose English literacy was self taught. For all this Ted was always filled with self doubt, a legacy of the hard life he lived as a child on the station and at the Brewarrina Mission. Ted never lost sight of the need to bequeath his knowledge and understanding of country to his people and to those who were genuinely interested in recording and documenting it.

In the early 1970s Ted worked with the Australian Federation of Credit Union Leagues (AFCUL) as a Field Service Officer. His job was to promote credit unions in Aboriginal communities throughout Australia. He assisted people in getting loans to help relocate people to their own houses.

Since this time, Ted has been involved in many cultural heritage projects – whether it be undertaking surveys, collaborating in the archaeological studies, relating the Dreamtime stories to those of us who would listen; or raising the general issue of our mismanagement of water resources. One of the most important projects was his involvement with Brother John Giacon, a Christian brother and linguist in Walgett. Between them they prepared and published the first Yuwaalaraay/Gamilaraay Dictionary and published the Dreamtime stories of Narran Lakes to the northwest. He cared about Australian society as a whole, both white and black.

Ted Fields was a remarkable Australian. A native Yuwaalaraay speaker, he taught himself to read and write English, he overcame huge obstacles in his personal life and in his everyday life as an Aboriginal man in outback Australia. His commitment to culture and heritage and communicating it to those around him – to ensure it lives on for his children and grandchildren – attests to his deep connection to country, his love of country and the associations therein.

Ted’s life partner, Wilma predeceased him and they are survived by their three children Laura, Dermott and Ted Jnr (Sonny) and their immediate and extended families. Uncle Ted (or ‘trouble’ as his siblings called him) is also mourned by his sisters Flossy (81), Evelyn (74) and brother Jimmy (76) and families.