Earthenware of Anuru Bay: A reassessment of potsherds from a Maassan trepang processing site, Arnhem Land, Australia, and implications for Macassan trade and the trepang industry 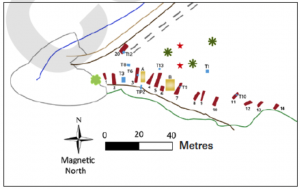 Malara illustrating stonelines, excavation trenches, and
pottery collection Areas A and B (published in Australian Archaeology 79).

Previous excavations at Malara (Anuru Bay A), a Macassan trepang processing site in Arnhem Land, produced a substantial quantity of earthenware pottery (Macknight 1969). Earthenware pottery has also been reported and collected from Macassan sites elsewhere along the Northern Territory and Kimberley coastlines. Although several studies have been undertaken on earthenwares from Macassan sites in Australia, it was uncertain whether any included sherds from the significant Anuru Bay site. This paper details the results of the analysis of earthenware sherds recovered during a recent programme of excavation and surface collection at Anuru Bay. The earthenware was analysed in order to investigate its source and to determine whether one or more regions of manufacture were evident. Our results indicate that the sole source for all of the analysed pottery was likely south Sulawesi. It would appear that the trepang fishing fleets who camped at Malara provisioned non-perishables, such as local earthenware, at the port of Makassar prior to beginning their voyage to Marege. This strengthens claims for Makassar as the major operating port for the fleets operating in the Anuru Bay area.

Wesley, D., T. Jones, S. O’Connor and W. R. Dickinson
Earthenware of Anuru Bay: A reassessment of potsherds from a Maassan trepang processing site, Arnhem Land, Australia, and implications for Macassan trade and the trepang industry
December 2014
79
Article
You must be a member to download the attachment ( Login / Sign up )