Dating the present at Nawarla Gabarnmang: Time and function in the art of a major Jawoyn rock art and occupation site in western Arnhem Land 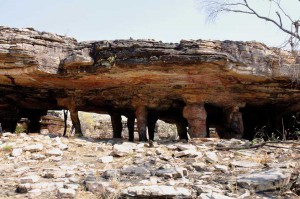 Winner of the Ulm-Ross Prize for the best paper in Australian Archaeology in 2013 – available for free download to everyone via the link below!

Nawarla Gabarnmang is a major rock art and occupation rockshelter in the Jawoyn lands of western Arnhem Land. On the basis of (1) dating of beeswax underlying pigment art, (2) the presence of a probable contact motif, and (3) traditional owner comments, it appears that the most clearly visible art in the rockshelter was produced within an archaeologically narrow window of time in the past 600 years, with the most recent art production occurring between AD 1845 and 1940. Studies of motif superimpositioning also suggest that at least three functionally distinct phases have occurred in the recent period rock art. Spatial mapping of the major art styles also indicates that the latest styles are restricted to the central and largest panels, affording them visual prominence with the highest dramatic impact.

Gunn, R.G., R.L. Whear and L.C. Douglas
Dating the present at Nawarla Gabarnmang: Time and function in the art of a major Jawoyn rock art and occupation site in western Arnhem Land
2012
75
55-65
Article
Download
You must be a member to download the attachment ( Login / Sign up )