Comparative records of occupation in the Keep River region of the eastern Kimberley, northwestern Australia 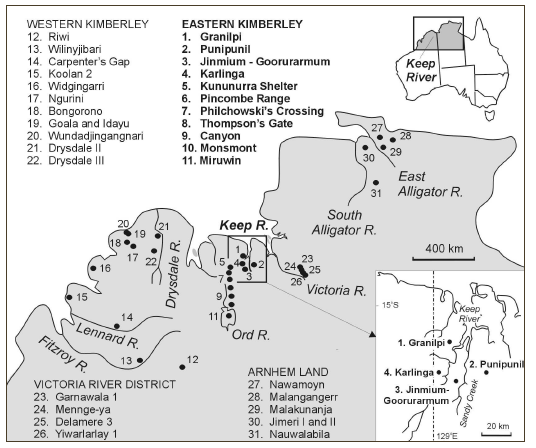 This paper considers the record of occupation in the Keep River region of the eastern Kimberley, and whether archaeological records are equally preserved within as well as between regions. Luminescence dating, radiocarbon dating and archaeological evidence from eight rock shelter sequences provide only late Holocene (5–0 ky BP) occupation sequences, whereas luminescence dating and archaeological evidence for three sand-sheet sequences indicate occupation dating to 18 ky BP. Given that rockshelters and sand sheet excavations can produce such different chronologies, it is questioned to what extent the representative records for the eastern Kimberley, and the adjacent western Kimberley, Victoria River District and Arnhem Land regions can be compared. It is also argued that in the absence of comparative non-occupation chronostratigraphy, particularly of rockshelters, it remains unclear whether apparent Holocene intensification is a product of cultural change or of research and preservation.

Ward, I.
Comparative records of occupation in the Keep River region of the eastern Kimberley, northwestern Australia
2004
59
1–9
Article
You must be a member to download the attachment ( Login / Sign up )