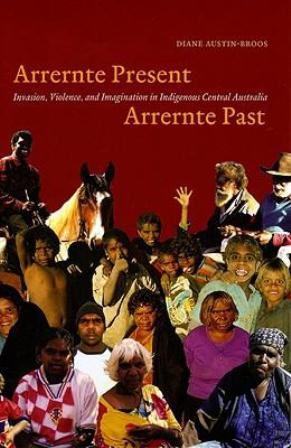 Two and a half years after the Howard government declared a ‘national emergency’ in Northern Territory Indigenous affairs, policy-makers are still coming to terms with the dilemma of valuing Indigenous autonomy and difference, while seeking to ‘close-the-gap’ between living standards in Indigenous communities and those enjoyed by the broader Australian population. Not surprisingly, Arrernte Present, Arrernte Past: Invasion, Violence, and Imagination in Indigenous Central Australia, is a topical commentary on this period of uncertainty and perplexity. It is also an important work of ethnohistory that contextualises present conditions in Indigenous Central Australian communities in a broader history of socio-cultural change. Austin-Broos is not content to paint a broad-brush picture of invasion, dispossession and the structural processes associated with institutionalisation, the outstation movement, welfarism and the Northern Territory Emergency Response (NTER). Rather, the author develops the notion of ‘ontological shift’ to provide an analysis of the way in which the world and being of the Western Arrernte has changed since the arrival of explorers and pastoralists in the 1860s. In doing so, the book doesn’t merely describe a change of circumstances; it develops Heidegger’s notion that material life is defined by particular acts that are taken for granted in terms of their value and take shape as relational orders of value. Austin-Broos argues that ‘when such orders are disrupted, in this case by invasion and subsequent forms of change, things and strategies start to lose sense. At the same time, other phenomena become apparent or “present,” waiting to be invested with value as social practice changes course’ (p.5). Employing a theoretical approach termed a ‘phenomenology of the subject’ and drawing on extensive archival and ethnographic research, Austin-Broos marks two significant periods of change as moments of ‘ontological shift’. The first of these periods was the initial invasion by white pastoralists. Alienated from their land, the Western Arrernte ‘fell back to the Hermannsburg Mission’ (p.3) and developed a sedentary way of life with new social and economic orders. The second period of change was associated with land rights, welfarism and the outstation movement in which the Western Arrernte came to be included in the cash economy, while remaining peripheral and marginalised in Australian society.

The book is divided into three main parts (each consisting of three chapters) in which the author deals with the material thematically rather than chronologically. Part One draws mainly on fieldwork the author conducted in the 1990s in which Western Arrernte memories of the Hermannsburg Mission are coupled with archival and early ethnographic material to describe the initial decades of settler and missionary contact. Part Two then shifts to focus on contemporary everyday life for Western Arrernte people living in outstation communities. Austin-Broos draws on Farmer’s notion of ‘structural violence’ to describe how the violence of the everyday in insecure and changing marginalised communities is part of broader ‘intended’ and ‘unintended’ effects of Indigenous policy-making. She argues that contemporary Western Arrernte social suffering must be understood and placed into the historical context of ‘invasion, mission rule, and poorly conceived policies for a transition to modernity’ as processes of structural violence (p.10). Part Three examines the second moment of change in which the missionaries withdrew from Hermannsburg to be replaced by a ‘state sponsored return to tradition’ that was also the Western Arrernte’s ‘medium of modernity’ (p.177). Austin-Broos provides an interesting analysis of factionalism arising from the outstation movement in which the shift from life on the mission to self-determination produced new forms of intra-community loyalties along factional lines that were further entrenched by white politics. Through the course of this discussion, Austin-Broos suggests that an unreasonable burden of expectation was placed on outstations by the state.

Austin-Broos draws on Taylor’s concept of ‘modern social imaginaries’ to describe the difference between the Western Arrernte’s hopes for outstation life and the changing policies of the bureaucratic state. Through the course of the book, Austin-Broos describes three Western Arrernte social imaginaries that have developed through processes of ‘ontological shift’. The first was ‘an imaginary of tracks and a sociality focused on place and relatedness creating tracks … in which ancestral travel, geography, and daily practice were analogues’ prior to white settlement in the region (p.265). The second was associated with the arrival of the Lutheran missionaries in which pepe (a localised experience and metaphor for Christianity) became a central and ‘elaborate imaginary’ in a centralised, authoritarian regime. The final social imaginary that Austin-Broos suggests is the unsettled one in the present-day context, involving ‘Arrernte modernity on country’ (p.265). In doing so, Austin-Broos sets up a contradiction between the social imaginary of the ‘market individual’ and that of the Western Arrernte. For the Western Arrernte, Austin-Broos proposes, the subject is defined by social relations in which ‘autonomy is to be a player in the dynamics of aggregation and dispersal across a region’ marked by located relatives, tracks and beats (p.209). This is contrasted with the ‘market individual’ for whom autonomy is to be self-sustaining in the cash economy. The crucial question that comes out of this discussion is: Can there be a Western Arrernte experience of modernity when these imaginaries collide? Austin-Broos notes that there has been a substantial Arrernte engagement with ‘work’ either through waged labour or through Community Development Employment Projects (CDEP) programmes, however she suggests that many people ‘maintained social imaginaries that grafted work onto networks of relatedness stretched across a region’ (p.236). Austin-Broos argues that it is precisely these emplaced sets of social relations and identities that the state seeks to separate out from the economy for remote communities to be viable in a market-driven modernity. In doing so, the book urges for a dramatic change in direction by policy-makers but makes few substantive suggestions for the way forward. The final chapter on the NTER is probably the most topical, although many of the issues have been explored more thoroughly elsewhere. The real strength of the closing chapter is, however, Austin-Broos’ strong argument that the discourse surrounding the emergency ‘involved the way in which it stripped away both the cultural and structural specificity of a people, leaving only moral pathology and state control as the response’ (p.257). The overall success of this monumental work lies in its depth of scholarship and sensitive analysis of the complexities of social change for the Western Arrernte. This is a book that digs far below the surface of populist discourses and challenges many preconceptions that a reader may hold about everyday life in remote communities. I highly recommend this book for anyone with an interest in anthropology, Aboriginal history and contemporary issues facing Aboriginal communities in Australia.

John White
Book review of 'Arrernte Present, Arrernte Past: Invasion, Violence, and Imagination in Indigenous Central Australia' by Diane Austin-Broos
Dec 2010
71
85-86
Book Reviews
You must be a member to download the attachment ( Login / Sign up )