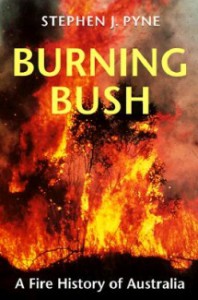 ‘Fire set to boil the whole biological billy that was Old Australia’ (p.8) … ‘Charcoal and eucalypt pollen march side by side in the geologic record of the late Pleistocene and Holocene’ (p.20) … ‘Lake George on the Atherton Tableland’ (p.2l). The hyperbole on the cover promises much, but I found this book an annoying mixture of heavy-handed prose and scientific inaccuracy. It’s easy to find holes in a work of such ambitious scope, but Pyne did set himself the task of using ‘fire as a means of historical understanding’ (p.xii). The flames are fanned across the page, fuses ignite, the ‘scleroforest’ marches, etc., etc. But in the 150 pages of pre-European fire there is a curious lack of discussion of how we know any of this. Or more specifically of the passionate (Pyne would call it fiery) scientific debate about the extent to which Aboriginal fire changed the face of the continent. There are other interpretations of Lake George, including one that puts it somewhere near Canberra. More heat than light.

Lesley Head
Book Note of 'Burning bush. A fire history of Australia’ by Stephen J. Pyne
June 1994
38
72
Book Reviews
You must be a member to download the attachment ( Login / Sign up )