Bodies in the Bog and the Archaeological Imagination by Karen Sanders 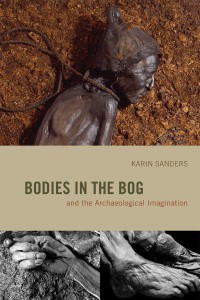 Bodies in the Bog is a strange, haunting and often inspiring book, beautifully and elegantly written (although sometimes the prose is let down by some muddy images). Despite the main title, the main themes are not so much concerned with the mummified remains of Iron Age people themselves but more to do with ways in which it is possible to ‘read them’ from the time of their disinterment from their swampy graves. In a very real sense, then, what Karin Sanders has done is to give ancient bog-bodies post mortem biographies, powerful voices that project backwards and forwards in time. Sanders’ sensitive treatment of this curiously preserved archaeological phenomenon enables us to ask questions not only about the human dead of the remote past but also about ourselves, and our own humanity. This study serves to contextualise bog bodies with broad brushstrokes and to offer a penetrative perspective on our past and our present. A central tenet of the book is the manner in which bog bodies allow our imagination to explore different arenas of human experience and expertise – from fictive literature to art and from politics to poetry.

Using P.V. Glob’s seminal text The Bog People (Faber and Faber, London, 1969) as a platform, Sanders takes the reader on an intricate and often disturbing journey along a pathway that seeks to interpret interpretation. Her introduction, titled ‘Remarkable Remains’, discusses the way in which the evidence for bog bodies has been used by modern scholars and writers, the ambivalent nature of bogs themselves and their freakish preservation of organic remains. The most powerful point made here concerns the manner in which bog bodies interrupt the linear flow of time, and catapult themselves from their own period into ours. This is because these bodies are visible to us as uncomfortably fleshed humans rather than as comfortable skeletons whose humanity is distanced by the absence of muscle and skin. Sanders lyrically describes such interruption as ‘a bursting bubble in a landscape of time’. Introduced in this early section but running as a constant thread through the book is the idea of bog bodies as doubly temporal, as having undergone a rebirth in their emergence from the bog.

Chapter 1, ‘Nature’s Own Darkroom’, compares the bogs as repositories for the human dead to a camera lens, providing a ‘photograph’ of past individuals. Both the camera and the bog have the property of embalming a body and enshrining the person to whom it belonged. Sanders describes the bog as a ‘prosthetic memory’ for it replaces something missing, the past (usually decayed) body. Using Tollund Man as a prime example – because only his head is genuinely preserved and on display – this chapter also engages with dichotomies of originality/authenticity and the bogus element of restoration/reconstruction. Such observations lead to issues of ethics versus aesthetics and pose questions as to the relative validity of presenting ancient bodies as they came out of the bog, however distorted and incomplete, or of ‘prettifying’ them in order to tell a convincing story.

Chapter 2 is enigmatically called ‘The Archaeological Uncanny’. ‘Uncanny’ means ‘unnatural’, against the ordered, regular scheme of things, and the point is made that their very preservation acts against the proper decomposition process. I am less than convinced by the discussion of Freud, his ‘back to the womb’ theory and other Freudian concepts that form the nucleus of this section. Indeed, I found the matter on Freud and Jung discordant and otiose within the largely enthralling pulse of Sanders’ story. While I like the comparison between bog bodies and the casts made from the cavities left by the decay of the pathetic victims of the Pompeian disaster (and by the way Sanders makes a gross error in ascribing the Vesuvian eruption as occurring in 79 BC; it happened in AD 79), such comparison can be only partial since the casts are manufactured while the bog bodies are real flesh. Still, as argued here, both the bog bodies and the ‘remains’ of the Pompeian dead are liminal and immediate, bringing the modern viewer up-close and personal with their remote ancestors.

The recent hotly-contested debate about ‘Celticity’, the validity of a present Celtic identity for the north and western edges of Europe based upon past ethnicities (real or imagined) and the manipulation of identity are all highly relevant to and parallel with Sanders’ chapter ‘Uses and Abuses: Bog Body Politics’. This section deals with the hijacking and suborning of bog bodies to project current (or recent) political ideologies, such as Nazism. Most sinister of all, perhaps, were interpretations of ancient bog bodies, by such as Himmler, in terms of Tacitus’ (Germania 12) resonant phrase corpores infamae, a term the Roman writer uses to describe the marsh drownings of ‘disreputable bodies’, in order to fuel the Nazis’ denouncement of racial and sexual ‘deviance’ from the Aryan ideal. So, in this context, bog bodies (contained within slimy, dirty and miasmic swamps) were perceived as tropes of the effeminate and other. In airing such views, Sanders raised the quintessential issue of whether bog-bodies can legitimately ‘be seen as stand-ins for other extreme figures and victims in history’ (p.67). There follows a survey of the relationship between bog bodies and the presentation of the Holocaust in fictive literature, the presentation of the idea of these marsh mummies as topoi upon which to hang notions of humans at risk, as victims. In addition to the Nazi manipulation of ideologies, Sanders explores other ways in which bog bodies have been used as ethnic tools, ending the section with Seamus Heaney’s political take on bog bodies and his powerful poetic use of ancient Irish marsh victims to explore recent and current Irish sectarian troubles.

‘Erotic Digging’ is the title of Chapter 4. To me, parts of Sanders’ presentation of voyeurism and the erotic gaze lack conviction and, in contrast to most of the book, sometimes appear contrived. Such links as there are between bog bodies and sex derive, in part, from erroneous past identification of individual bog bodies as historical people. A good example of this practice is the middle-aged Iron Age female interred in the Haraldskjaer bog in Jutland, wrongfully identified as the cruel but voluptuous Viking queen Gunhild. Although false, such connections provide extra layers of meaning to ancient bog victims because they become imbued with the persona of their historical person as whom they are interpreted. Another conduit of sexuality is provided by Tacitus’s (Germania 19) account in which he describes the punishment meted out to adulterous ancient German women, who were stripped naked, their hair shorn and flogged out of their community. The nakedness of the female bog body and her lack of defence against both the gaze and the forensic penetration of her body may be perceived both as a kind of archaeological rape and as analogous to the punishment for sexual crimes recorded by Tacitus. Notwithstanding the sexual connotations of nakedness, vulnerability and adulterous punishment, the links made here between bog bodies and eroticism seem somewhat tenuous. Far more important a contribution to this part of the book is the wonderful fund of modern stories and poems woven around bog bodies, their excavation and the ‘gender-bending’ ambiguity surrounding such finds as the Windeby ‘Girl’, recently reassigned male status.

Chapters 5 and 6 are titled ‘Bog Body Art’ and ‘Museum Thresholds and the Ethics of Display’ respectively. Both are concerned with visual manipulation of bog bodies and the optical connections between the bog body as reality (or idea) and their modern ‘consumers’. The section on art contains a fascinating presentation of some truly remarkable paintings, sculptures and other artistic material inspired by bog victims that parallel the formidable assemblage of fictional literature and poetry surrounding these ancient corpses. The discussion on bog bodies in museums resurrects ethical issues and engages with the oscillation between opposites: corpse/artefact; individual/image; real/unreal, for example. Bodies are immediate, yet visitors to museums where they are displayed cannot touch them. The bog bodies are the remains of real people, yet their shiny, leathery skins give them the look of carved sculptures. Museums are artificial constructs where the rules designed to guard the treasures of the past serve to inhibit direct linkage between the body and those who study it. At what point does a human body become an object rather than a person?

The issues raised in Chapter 6 are developed further in the final chapter, a discussion on facial reconstruction. Sanders begins by pondering why faces are so important to notions of personhood, of self. The complexities surrounding the rebuilding of ancient faces from skeletal or soft tissues include matters concerning subjectivity and authenticity (I have a problem with facial reconstruction anyway because, for me, most of the rebuilt faces have a grammar of sameness that denies the corpses any real individuality). Most interesting, perhaps, is the way in which – to an extent – the recreation of ancient physiognomies is influenced by particular paradigms or canons regarding perceptions of race and civilisation. In this way, there can sometimes be a danger that facial reconstruction becomes a mirror of cultural baggage rather than objective forensic reasoning.

The final chapter is, somewhat misleadingly called a ‘Postscript’, in spite of its length, and would have been better termed Chapter 8. It is both a conclusion, drawing the threads of the book together, and an entity in itself whose nexus is the concept of frozen time. Here, the author returns to an initial consideration of her study, the notion of bog bodies as twice-born; their second birth being their uncovering within and recovering from their marsh tombs. She also considered the essentially liminal paradox of the bog victim: its close relationship to us but its foreign otherness. Despite the flesh and faces retained by these ancient people, they nonetheless appear very dead and very remote. The very survival of their bodies serves ironically to remind us that while they remain to be looked at and studied, the complex web of contexts in which these people walked, talked, thought, worked, laughed, loved and prayed have been wiped away. So although bog bodies allow us metaphorically to shake them by the hand, they do not allow us to speak to them, and their world is nearly as remote from us as if they were visiting Martians.

I found this book a joy to read because, unlike most archaeological studies, it combines scholarship with superb literary style, the whole salted by the provision of numerous imaginative pathways. I, for one, will never study or write about bog bodies in the same way again and I will try to ensure that the same is true of my students. Despite the few caveats mentioned above, it is a work of true originality that lifts bog victims out of their purely archaeological dimension and travels with them on a journey towards enlightenment. Early on in the study, the author speaks of bog bodies being embalmed with words. That is nowhere more true than in this book.