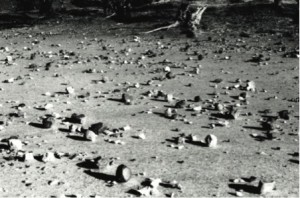 The post-depositional movement of stone artefacts within sites by treadage and scuffage (e.g. Matthews 1965; Stockton 1973) and site-maintenance activities (Steele 1987), their movement by animals and especially birds (Cane 1982; Solomon et al. 1986), and their in situ alteration (Hiscock 1985) have all been recorded in Australia. Site destruction on a large scale, especially by wave action and erosion on the coasts, has been commonly invoked in explanations of prehistory and sometimes demonstrated (e.g. Head 1987; Godfrey 1989). We present here preliminary investigations into a further stage in these taphonomic processes. We demonstrate not only site destruction in a semi-arid environment but also the formation of a new ‘site’, incorporating disturbed cultural material in a new deposit which could be mistakenly interpreted as an undisturbed occupation horizon.

Cameron, D., P. White, R. Lampert and S. Florek
Blowing in the wind: Site destruction and site creation at Hawker Lagoon, South Australia
June 1990
30
58–69
Article
You must be a member to download the attachment ( Login / Sign up )