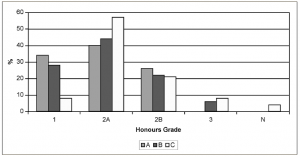 A bachelor degree with honours in archaeology is still seen as the fundamental level of academic achievement required to gain entry to the profession and to higher degree research in archaeology in Australia. This is despite the recent proliferation of other kinds of similar university awards, such as specialist diplomas and coursework masters programs. A comparison of the content and standards of honours degrees currently offered by Australian universities suggests variation in the threshold standards, the contents and the grading systems used. Considering our common belief in the role of the degree we think that it is now time to introduce standardisation and benchmarking practices, such as those implemented in British universities.

Beck, W. and J. Balme
Benchmarking for archaeology honours degree in Australian universities
2005
61
32–40
Article
You must be a member to download the attachment ( Login / Sign up )