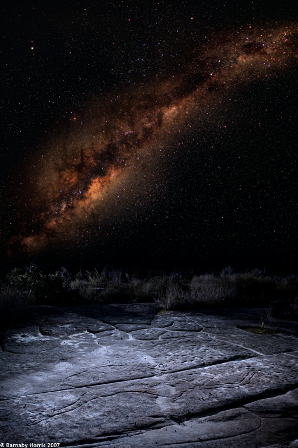 Ethnographic evidence indicates that bora (initiation) ceremonial sites in southeast Australia, which typically comprise a pair of circles connected by a pathway, are
symbolically reflected in the Milky Way as the ‘Sky Bora’. This evidence also indicates that the position of the Sky Bora signifies the time of year when initiation ceremonies are held. We use archaeological data to test the hypothesis that southeast Australian bora grounds have a preferred orientation to the position of the Milky Way in the night sky in August, when the plane of the galaxy from Crux to Sagittarius is roughly vertical in the evening sky to the south-southwest. We accomplish this by measuring the orientations of 68 bora grounds using a combination of data from the archaeological literature, and site cards in the New South Wales Aboriginal Heritage Information Management System database. We find that bora grounds have a preferred orientation to the south and southwest, consistent with the Sky Bora hypothesis. Monte Carlo statistics show that these preferences were not the result of chance alignments, but were deliberate.

Figure caption: The ‘Emu in the Sky’ visible over an emu engraving at Elvina Track in Kuringai Chase National Park north of Sydney, which may represent her celestial counterpart (published in Australian Archaeology 77:32).

Fuller, R.S., D.W. Hamacher and R.P. Norris
Astronomical orientations of bora ceremonial grounds in southeast Australia
Dec 2013
77
30–37
Article
You must be a member to download the attachment ( Login / Sign up )