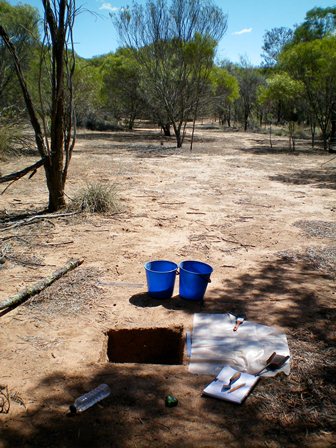 Mulka’s Cave is a profusely decorated hollow boulder at The Humps, a large granite dome near Hyden, 350km southeast of Perth. The importance of the artwork has been recognised for 50 years. Test excavations in 1988 yielded 210 mainly quartz artefacts assignable to the Australian Small Tool phase and a radiocarbon date of 420+50 BP from just below the lowest artefact found. The artwork was recorded in detail in 2004. The recorder considered the radiocarbon date to be ‘anomalously young’ because most of the artwork is in poor condition, suggesting that it was made 3000–2000 years ago. Other dated rock art sites in southwestern Australia came into use 4000–3000 BP. The excavators argued that the site was fairly insignificant, while the rock art researcher thought the profusion of motifs (452) made it a site of some significance. The main aim of this study was to investigate these conflicting claims by reinvestigating how Mulka’s Cave had been used by Aboriginal people in the past.

This research became possible because local tourist organisations obtained federal funding to install an elevated walkway outside the cave in 2006. Under Section 18 of the Aboriginal Heritage Act 1972 (AHA), 12 of the 34 postholes required were excavated and artefacts were collected from all the ground surfaces to be impacted. Subsequently, under Section 16 of the AHA, four small 50cm x 50cm testpits were excavated around the site: outside the cave entrance, on The Humps and in the Camping Area, a sheltered spot where the Traditional Owners had camped as children. Analysis focused on the numbers and types of stone artefacts recovered. The artefacts excavated in 1988 were also reanalysed. Five radiocarbon dates were obtained, which suggested that people began visiting the Camping Area (and using ochre) about 6500 BP, making Mulka’s Cave one of the oldest radiometrically dated rock art sites in southern Western Australia. The artefact data from Mulka’s Cave were compared to those from these other sites.

The low artefact discard rate and high proportion of retouched/formal tools found at Mulka’s Cave may indicate that the site was used differently from the other sites, but the data are problematic. Most (70%) of the handstencils in Mulka’s Cave can be attributed to adolescents, possibly boys, which may also suggest that the site had ceremonial significance; perhaps as a focus for male initiation rituals. The artefact data do not support this hypothesis, however. There is no evidence of spatial patterning in artefact type or frequency across the site, which would be expected if the cave had had a ritual function. Instead, the Camping Area, Walkway Area and Mulka’s Cave itself seem to have been used similarly.

It was concluded that, given the scarcity of free-standing potable water in the surrounding region and the presence at The Humps of two capacious gnammas (rockholes), people probably visited the site when the gnammas were full. At Mulka’s Cave, they may have added to the corpus of rock art and carried out other ceremonial business, but there is no archaeological evidence for the latter. It was concluded that much more research needs to be undertaken in this neglected part of the semi-arid zone before the significance of Mulka’s Cave can be properly assessed and its place in the archaeological record of southwestern Australia determined.