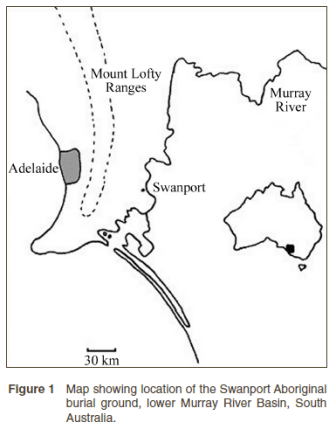 The Swanport Aboriginal skeletal population has played a significant role in physical anthropological research in Australia. This paper provides the first chronometric dates for this important burial population. AMS radiocarbon determinations on bone collagen from six individuals showed a calibrated 2σ range from 1027 BC to 1521 AD. On the basis of this sample, the Swanport population appears to pre-date all European contact in Australia. These dates contradict previous assumptions that associated the Swanport burial population with a recent protohistoric period or a discrete period of time related to historic smallpox epidemics in the 19th century. The current chronometric range of approximately 2500 years for inhumations at Swanport indicates the use of the site as a burial ground over an extended period of time during the late Holocene.

Pate, D., T.D. Owen and E. Lawson
AMS radiocarbon dating of bone collagen: Establishing a chronology for the Swanport Aboriginal burial ground, South Australia
2003
56
8–11
Article
You must be a member to download the attachment ( Login / Sign up )