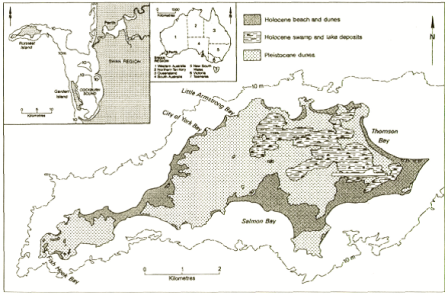 The generally accepted age for the earliest human occupation of Australia is about 60,000 years (e.g. Chappell et al. 1996), with many dates centred around 30,000 to 40,000 years (e.g. Pearce and Barbetti 1981; Dortch 1984; Allen and Holdaway 1995; Dortch and Dortch 1996). Recent, but disputed, archaeological evidence at Jinmium in the Northern Territory indicates a much earlier date of occupation of 116,000 years (Fullagar et al. 1996; Spooner 1998) in line with palaeoecological evidence (e.g. White 1994; Roberts and Jones 1994; Thorne et al. 1999). We present independent evidence from Rottnest Island, Western Australia, which provisionally suggests a late Pleistocene (and possibly Last Interglacial?) age for Aboriginal occupation in Western Australia.

Hesp, P.A., C.V. Murray-Wallace and C.E. Dortch
Aboriginal occupation on Rottnest Island, Western Australia, provisionally dated by aspartic acid racemisation assay of land snails to greater than 50 ka
December 1999
49
7–12
Article
You must be a member to download the attachment ( Login / Sign up )