A re-evaluation of ‘petroglyphs’ on Blue Tier, northeast Tasmania 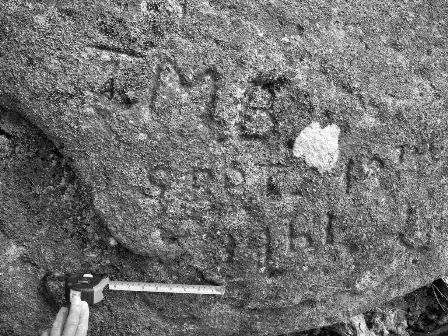 In 1957 several eminent scientists (‘the 1957 Blue Tier Expedition’) investigated unusual rock markings reported to be Aboriginal petroglyphs on Blue Tier in northeast Tasmania and concluded that some markings were the result of dissolution of granite by roots, some were made by the subaerial action of plants abrading granite, and others were made by miners and prospectors. However a recent publication has restated claims of an Aboriginal origin for the ‘petroglyphs’. As a result the markings were re-examined so that their genesis could be conclusively decided. The markings on Blue Tier are classified into eight types: (1) Rills; (2) Long Linear Grooves; (3) Circular Holes; (4) Inscriptions; (5) Oval Depressions; (6) Regularly Spaced Circular Depressions; (7) Short Linear Grooves; and (8) Small Circular Depressions. We conclude that Types 1, 2, 5, 7 and 8 markings are natural; Type 3 markings were drilled by prospectors or geologists; Type 4 markings were incised by miners or visitors; and Type 6 markings, which form a distinctive feature just below the crest of Australia Hill, were made by tin prospectors employed by the Mt Lyell Railway and Mining Company Limited. Therefore all markings on Blue Tier have been either produced by natural means (chiefly chemical weathering) or by geologists, prospectors and recent visitors. There is no evidence for the presence of Aboriginal petroglyphs on Blue Tier.

A re-evaluation of ‘petroglyphs’ on Blue Tier, northeast Tasmania
Jo Field and Peter McIntosh
December 2009
69
11-20
Article
You must be a member to download the attachment ( Login / Sign up )