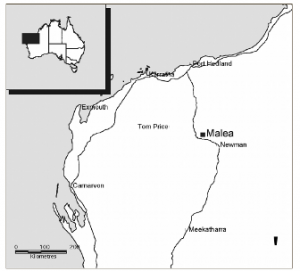 Map showing the location of Malea Rockshelter in the Pilbara (published in Australian Archaeology 56:44).

In February and March 1994, McDonald, Hales and Associates conducted on behalf of Hancock Prospecting Propriety Limited (subsequently Hope Downs Management Services) a series of archaeological evaluations within the proposed Hope Downs Iron Ore Project area, located approximately 75 km northwest of Newman, Western Australia (Fig. 1). These evaluations formed part of an on-going programme of Aboriginal heritage research and consultation initiated in March 1992 and only recently completed (McDonald, Hales and Associates 2001). During the course of the archaeological evaluations, some 23 potential archaeological deposits were test-pitted. Of these, only one, named ‘Malea’ by participating members of the Aboriginal community, was found to contain a significant depth of cultural deposit.

Edwards, K. and A. Murphy
A preliminary report on archaeological investigations at Malea Rockshelter, Pilbara Region, Western Australia
2003
56
44–46
Short Report
You must be a member to download the attachment ( Login / Sign up )