A minimum age for early depictions of Southeast Asian praus in the rock art of Arnhem Land, Northern Territory 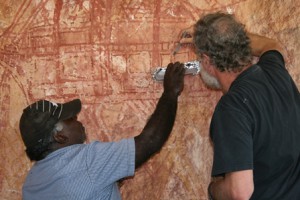 In 2008, we began two related research projects that focus on recent Australian rock art, made after the arrival of Asians and Europeans, in part of northwest Arnhem Land’s Wellington Range. This area has extensive and diverse rock art, including many examples of paintings that reflect contact between local Aboriginal people and visitors to their shores. At some sites figures made of beeswax are found superimposed under and over paintings, thus providing a means of obtaining minimum and maximum ages for pigment art. We reporton the results of an initial radiocarbon beeswax dating programme at the Djulirri site complex. Results include the earliest age for a depiction of a Southeast Asian watercraft in Australian rock art, which is also Australia’s earliest contact period rock art depiction discovered so far. Based on the probability distribution of the calibrated ages, it is 99.7% probable this image dates to before AD 1664 and likely is much older. The significance of this result is discussed in relation to early contact history, as revealed by historic documents and archaeological excavation. Other important results suggest a close encounter between local Aboriginal people and Europeans occurred in the 1700s, before British exploration and settlement in the Arnhem Land region.

Paul S.C. Tacon, Sally K. May, Stewart J. Fallon, Meg Travers, Daryl Guse and Ronald Lamilami
A minimum age for early depictions of Southeast Asian praus in the rock art of Arnhem Land, Northern Territory
December 2010
71
1-10
Article
You must be a member to download the attachment ( Login / Sign up )