A Lang Park mystery: Analysis of remains from a 19th century burial in Brisbane, Queensland 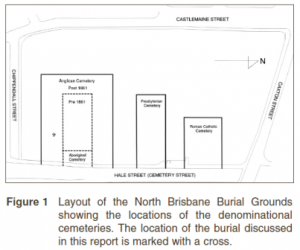 Layout of the North Brisbane Burial Grounds showing the locations of the denominational cemeteries (published in Australian Archaeology 56:1).

Salvage excavation of the Suncorp Stadium (Lang Park) redevelopment site in Brisbane revealed almost 400 graves. Originally known as the North Brisbane Burial Grounds, it was the site of Brisbane’s principal cemetery between 1843 and 1875. A grave in the Anglican section of the cemetery yielded several teeth and associated non-dental bone fragments, and stature data derived from the coffin indicate a child burial. Observation of the stages of tooth eruption, resorption, and formation revealed evidence for two children, one aged approximately three years old and the other aged 12. An examination of the coffin furniture showed that the coffin was bought by a wealthy Anglican family, and DNA analyses suggest that the older individual was of Eastern European descent. These results suggest the burial of the older child in the same grave as the younger was most likely clandestine, and highlight the importance of post-excavation analyses to the interpretation of Australian cemeteries.

Haslam, M., J. Prangnell, L. Kirkwood, A. McKeough, A. Murphy and T.H. Loy
A Lang Park mystery: Analysis of remains from a 19th century burial in Brisbane, Queensland
2003
56
1–7
Article
You must be a member to download the attachment ( Login / Sign up )