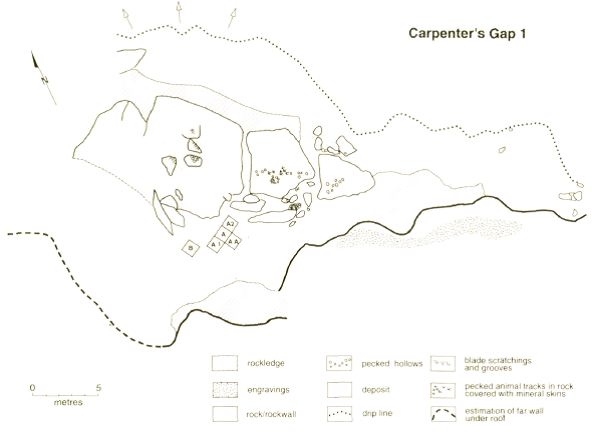 Plan of the Carpenter’s Gap 1 rockshelter (published in Australian Archaeology 45:21).

An important Pleistocene-Holocene sequence was discovered when Carpenter’s Gap Site 1 was excavated in 1992 and 1993 by Sue O’Connor (O’Connor 1995). The site is located in Windjana Gorge National Park, in the Napier Range, which lies at the southern edge of the Kimberley region (Fig. 1). Carpenter’s Gap Shelter 1 has an archaeological sequence spanning at least 40,000 years, from the late Pleistocene to the present. A unique feature of this site is the extensive macrobotanical remains preserved: over 2000 seeds and plant parts from one square metre have been recorded. The Bunuba Aboriginal people, traditional owners for this area, consider this rockshelter to be an important cultural landmark. There is supporting evidence, from the petroglyphs and pictographs within this rockshelter, and the rockshelter’s continuing role within Bunuba Aboriginal culture, of considerable time depth and continuity to the human occupation and use of this site.

O'Connor, S. and K. McConnell
40,000 year record of food plants the southern Kimberley Ranges, Western Australia
December 1997
45
20–31
Article
You must be a member to download the attachment ( Login / Sign up )