Dharawal Hatchets: Patterns of Movement in the Landscape of the Illawarra Region of NSW 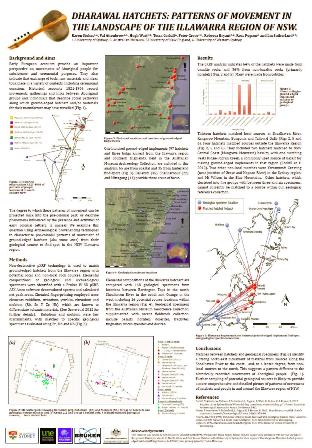 Early European accounts provide an important perspective on movements of Aboriginal people for subsistence and ceremonial purposes. They also indicate that Aboriginal exchange took place in a variety of contexts, including ceremonial occasions. The degree to which patterns of movement described in these accounts reflect the precolonial past or describe phenomena influenced by the presence and activities of early colonial settlers is unclear. One way to examine this is to employ archaeological provenancing techniques to characterise precolonial patterns of movement of material. Peoples of the Dharawal language group, of the NSW Illawarra Region, distinguished themselves as fresh water, bitter water or salt water people, depending on whether they occupied coastal, swamp or plateau landscapes. Historical accounts suggest that at the time of European settlement Dharawal groups, who came together for ceremonies, had an established regional economy with movement of items (and people) via pathways linking the highlands and resource-rich coastal plains. Several Illawarra quarry sites are known to have provided stone for hatchets and other tools. To explore these patterns more closely our study compares the historical movements of people within the Illawarra region against the movement of hatchets from their geological points‐of‐origin to find‐spot. By linking hatchets with their raw material sources we aim to reconstruct local and inter‐regional exchange systems within which these artefacts, and/ or raw materials moved. To achieve this objective we employ non-destructive pXRF technology to match elemental signatures of ground edged hatchets with geological sources. This project is part of a broader study of exchange systems and social networks of Aboriginal southeast Australia. Data from this study is referenced against both intra and inter‐regional sources, and a comparably scaled sister study of the NSW Central Coast, allowing Dharawal exchange systems to be considered within this wider context.

The citation for this poster is: