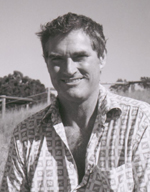 The Bruce Veitch Award for Excellence in Indigenous Engagement 2010

In 2010 the Bruce Veitch Award was presented to Dr Peter Veth of the Australian National University. Peter has been involved with the Martu Aboriginal community of the Western Desert since beginning his PhD in 1986.

In recent years, at the instigation of Martu custodians, Peter co-ordinated a successful ARC Linkage Project–The Canning Stock Route Project–which is now in its third year.

One of the most tangible outcomes of the project has been the emergence of an Indigenous Governance Structure for the many Aboriginal groups living along the 1700 kilometres of the Stock Route. This has become a way for Aboriginal groups to respond to research and management issues on an annual basis, and to organise co-ordinated responses to impacts on their country.

At the ANU National Centre for Indigenous Studies, Peter is involved in the supervision and mentoring of Indigenous scholars, and has been pivotal in developing a cohort of indigenous post‐graduates in a range of fields.