The AAA response to the WA Aboriginal Heritage Amendment Bill 2014 is copied below for the information of AAA members. Alternatively you can download the entire statement as a pdf via the following link: AAA Response.

Re: Response by the Australian Archaeological Association to the Aboriginal Heritage Amendment Bill 2014

Thank you for providing an opportunity to offer feedback on the proposed legislative changes to the Aboriginal Heritage Act 1972.

The Australian Archaeological Association (AAA) is the largest archaeological organisation in Australia, representing a diverse membership of professionals, academics, students, Indigenous stakeholders and others with an interest in archaeology and heritage management. AAA has over 1,000 Members many of whom serve as heritage policy makers, consultants, researchers and educators across the nation. Some of our members also serve as international experts to UNESCO, ICOMOS, WIPO and the World Bank. Consequently the AAA believes it has both the breadth of expertise and mandate to comment on substantive issues associated with the Aboriginal Heritage Act 1972 and the Aboriginal Heritage Amendment Bill 2014.

The Australian Archaeological Association notes that the Aboriginal Heritage Amendment Bill 2014 has been drafted in response to the perceived need to improve heritage management in WA, including:

The AAA believes that the import of the substantive changes to the Act will not become clear until the regulations that will inform how the changes are implemented are drafted. We request that when these regulations are drafted they are released for review. Members of the AAA Executive have been assured by both Dr John Avery (external consultant to the WA Government) and senior staff of DAA (e.g. Dr Kathryn Przywolnik) that the amendments are unlikely to reduce existing site protection or management regimes. There have been assurances that the role of heritage professionals will continue. This appears to be contrary to recent statements made by the Minister for Aboriginal Affairs.

Significant concerns of the AAA Membership include:

The AAA argues that most major land users and managers in Western Australia have invested heavily in Cultural Heritage Management Systems that have overall worked well; which have responded to the post-native title arena; and which are benchmarked and audited regularly as part of their compliance frameworks. There are heritage performance indicators which are regularly reported on to boards, shareholders and the broader community. The AAA believes significant Indigenous capacity-building investments have made by these parties and is curious as to why ‘a framework of risk’ would now be introduced in the assessment of Aboriginal sites. Contrary to the view that heritage practitioners are intermediaries, the majority of our members are engaged in numerous initiatives that benefit both Aboriginal communities, developers and the people of Western Australia; and have a deep and long-abiding commitment to both the protection of Aboriginal heritage and the welfare of the State.

The overwhelming concern of our membership in Western Australia is that the administration of the Act has been opaque in effect and that this might not improve with future amendments.

The AAA has been provided with documentation that shows that assessments over the last two years of both s18 and s16 applications by the DAA appear to be inconsistently determined and have acted to diminish both the significance and effect of the protection of Aboriginal sites. It is inevitable that the proposed changes to the Act are viewed as a strategy to cut regulatory red-tape and reduce land-use costs rather than the protection of sites or the documentation of places that will be destroyed by development.

The AAA is concerned that the major investment its members have made to work effectively with proponents and also ethically with Indigenous communities, councils and corporations is undermined by these changes to the administration of the Act. There is the very real possibility that this capacity and knowledge will be lost. This could come at a real cost to timely heritage evaluations and effective management and result in increased risk and uncertainty to land-users.

Some serious omissions to the Amendments that the AAA would like to see addressed include:

1) Section 5 of the AHA is being interpreted in new ways by the DAA. The Minister for Aboriginal Affairs has reportedii that between January 2011 and June 2013 there was a change in the proportion of places assessed by the ACMC to be sites from 80% to 23% (Figure 1). The AAA believes this major change has occurred due to new guidelines being applied to s5 of the Act. Seven threshold criteria are noted on the DAA website under s5a with ‘critical’ site descriptors including: intactness, temporal context, complexity or diversity, relationship between objects and the place, rarity and uniqueness, context to other places, contribution to research. These criteria would appear to derive from other instruments such as the Burra Charter. Their accurate assessment both in Australia and internationally has relied on the technical expertise of heritage practitioners and submissions from Traditional Owners/custodians and their counsel.

The AAA is particularly concerned that the proposed provisions for assessing significance, or conversely the lack of sites, by the CEO should require a level of knowledge of the cultural assets of a property which can only be known through regional assessment of sites and skilled technical evaluations. To proceed without this data is to risk both the status of heritage sites, which may be unrecorded or buried, and the presumed certainty of the resulting compliance for proponents. 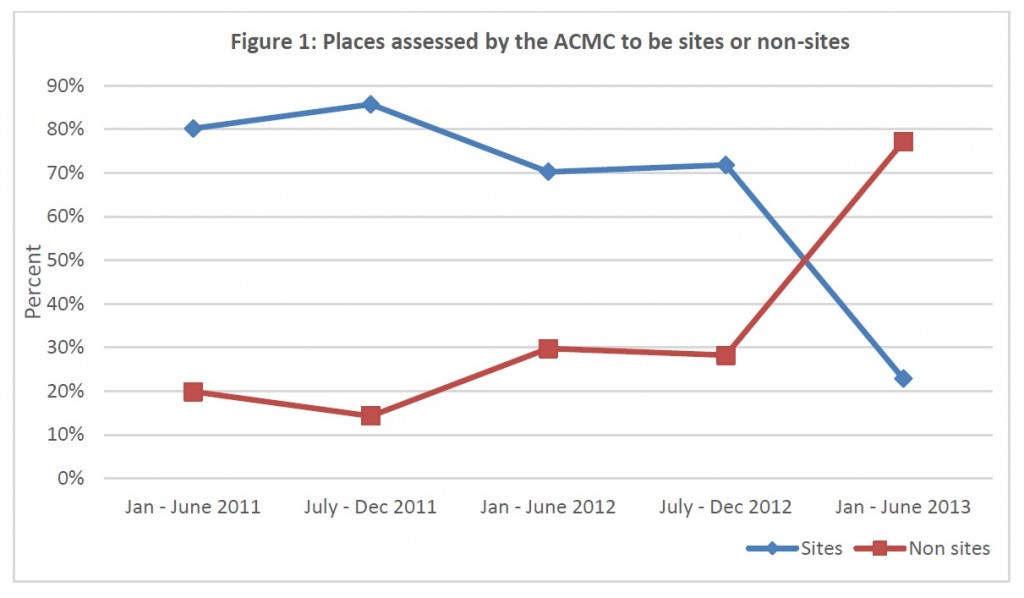 The evaluation role of the ACMC has been effectively removed and there is no longer a provision for a heritage professional to sit on this committee. Therefore, site significance will be largely moderated by the DAA. Given that most of the cultural assets of WA have not yet been systematically mapped (including the most prominent regions with a history of industry use – such as the rock art of Burrup or Murujuga), the risk that evaluation of site significance cannot be benchmarked at the regional, let alone State level, is profound. The AAA believes that the DAA is not adequately resourced to deal with the scale of these complex benchmarking exercises. A simple comparison in the biodiversity realm would be the agreed need for proponents to seek advice on their impacts on rare and endangered species on a property. The difference, however, is that heritage sites are finite and non-renewable.

2) The AAA believes the government is missing an opportunity to better define ‘significance’ or offer better definitions of sites under section 5. The published criteria, noted on the DAA website, do not provide a transparent framework for heritage parties as these are heritage principles and not assessable criteria under the AHA.

3) The AAA notes the move towards increased transparency in the form of a register of decisions. The rationale for site assessment and significance assessments, however, will not be logged. These details are required if heritage professionals and stakeholders/proponents are to understand and comply with the new regulations. Proponents may also wish to revisit earlier assessments for acquired projects.

4) The AAA notes over 1000 cases where the ACMC has determined that sites are eligible under the AHA, but have then been the subject of a successful section 18 application. They have now been moved by the DAA from the Register of Aboriginal Sites to the Other Heritage Places list and labelled Stored/Not A Site. The DAA define the Stored/Not A Site category as “the place has been assessed as not meeting Section 5 of the Aboriginal Heritage Act 1972”. This is clearly incorrect and is misleading. These places should remain on the Register of Aboriginal Sites with an additional category added to accommodate sites/places that have been impacted.

5) Another serious omission in relation to the due process of decision making is the absence of a statutory right of review for heritage professionals or Aboriginal persons. While Section 19D(2) provides for review of decisions by the State Administrative Tribunal, this should be expanded to “Any person, including any Aboriginal person, whose rights or interests may be affected by a decision under subsection (1)”.

6) The AAA has concern over the function of Other Heritage Places (OHP) and future Heritage Information Submissions (HIS) of the Register. Under the Public Records Act and the newly drafted s50 and s68, this site information should be made available. It is crucial that DAA maintains proper records of all assessments and that the rationale for assessments is clear and acceptable to experts and non-experts.

7) Section 50B(3) ought to be amended to oblige the CEO, when deciding whether a place or object is one to which the AHA applies or whether it should be added to or deleted from the Register, to consult with and obtain and accord primacy to the views of the relevant person(s) of Aboriginal descent or Aboriginal community.

8) The DAA has concerns regarding inefficient practices and market failure and has drafted the Amendment Bill to include the ability for the DAA to charge for the completion of preservation, restoration, and conservation of Aboriginal heritage. The AAA would suggest that this is not an efficient use of DAA resources and that they should consider an accreditation process (such as that used by Heritage Victoria) for heritage professionals as part of best practice and the raising of standards of work.

9) To aid in transparency Parts IV and VIIA should be amended to include a provision for the publication of reasons for any decision made under those Parts relating to authorisations, declarations and permits and the registration of the same.

10) Permits should have expiry dates without the possibility for permits to be passed on and held active after expiry indefinitely – s182a, s19A3 and 4, s19C4 and 5. The significance of archaeological sites (and other heritage places, or stretches of landscape once thought to be void of sites) may change over time with new research, destruction of other examples, landscape erosion and fires. Rock art galleries may only be adequately recorded as new image enhancement software and recording tools become available. Permits cannot pre-empt new technologies, knowledge states or future acts.

11) There is no stipulation as to where the ‘historical record’ of deleted information will be stored or how it can be accessed – s50E4.

12) Previously all sites were protected whether they were registered or not. Under s7A a dichotomy now appears in that ‘a person, court or tribunal’ may have need to consider whether a place or object is a site and yet in effect the CEO can only make that determination. In practice ad hoc decisions will be made in the field as to whether something is a ‘site’ (under the Act) or an ‘other heritage place’ (undefined).

The AAA believes that the diversity of land tenure and heritage management regimes that have developed in WA, as well as the diversity of heritage sites in this State, requires flexibility, extensive knowledge and understanding by heritage professionals which cannot be fulfilled by a limited number of Departmental Officers in the DAA. The intent to streamline process is admirable, but the likely volume of assessment work required will be more than can be handled in house. Similar initiatives in other jurisdictions, (such as the Part 3A process in NSW) have not succeeded and have been abandoned. ‘One-stop-shops’ appear attractive but they do not provide legal certainty as the substantive issues requiring detailed site documentation and significance assessment still exist.

The AAA encourages the State to work closely with heritage professionals, Indigenous parties, land-users and land-managers. These groups have invested in long-term cultural heritage management systems that have demonstrably resulted in better compliance and reduced risk throughout the State.